Luckpenny is the first recording collaboration between Karen Tweed (Piano Accordion) and Tom McElvogue (flute) and embraces the music they grew up playing – Irish Traditional reels, jigs and hornpipes. It is simply a delightful musical conversation shared by two musicians on top of the world celebrating the repertoire they used to share at the Listowel or Kilkenny Fleadh Cheoils many moons ago and still do today, where they are now based in County Longford.

Stunning musicianship with the best of old tunes played from the heart. Simple tradition at its nest. 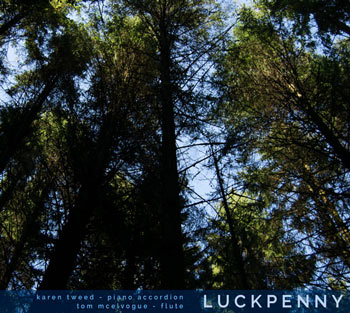 We began thinking about the idea of recording together early in 2016. Initially using melodica and whistle, we then moved onto accordion and flute. At that time, we were aware that a very good friend of ours (Paul Ruane) had been diagnosed a terminal illness and was undergoing several treatments. During the early part of the same year, Paul’s health deteriorated and very sadly Paul passed away in August of 2016. It is not possible to express in words how much Paul Ruane meant to both of us both as a friend, musician and wonderful human being. He touched our lives so long ago and his enthusiasm and joy were infectious. Over the last few months of Paul’s life, we and our dear friend Norman Holmes reminisced about how we all had such great fun in our younger days when we simply played so much music for the love and fun of it. Norman and his dearest Janet gave us so much time, love, help and support in trying to capture those early days in this recording. We offer this recording as a dedication to the life of one of the most generous people we have had the good fortune to meet along our wide and varied travels. This is for you Paul Ruane.

The photograph that forms a backdrop to the album cover was taken in Tullynally Castle Gardens in Castlepollard, Co. Westmeath. If you haven’t been we’d highly recommend it.

The photograph on the back cover is an image of the sea in the bay of crabs, Tenerife. A stunning location inhabited by brightly coloured crabs!

The photograph used on the CD print was taken from a bowl of rose petals kindly arranged by Karen. The inset photograph of Karen and Tom was taken at the top of Mount Tiede in Tenerife.